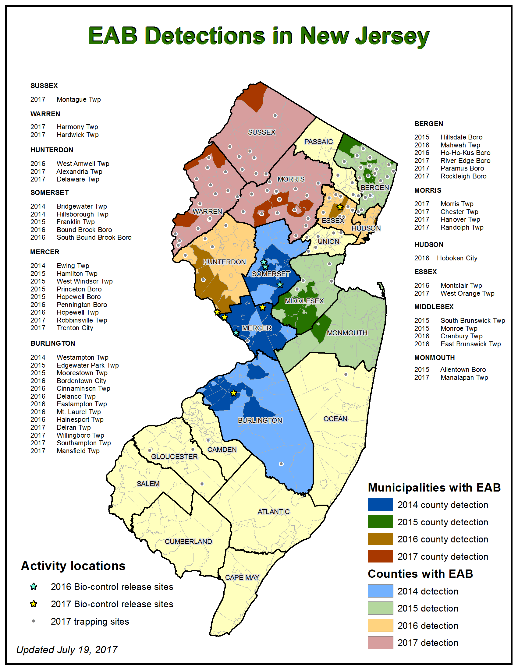 Emerald ash borer (Agrilus planipennis) was first discovered in southeastern Michigan in 2002 and has been since identified in several neighboring states including Indiana, Illinois, Ohio, New York, New Jersey, and Pennsylvania. This beetle has also been found in Maryland, West Virginia, and Windsor, Canada. This borer probably has been established in the Michigan area since the late 1980s. Emerald ash borer larvae feed in the outer sapwood of ash trees and can rapidly girdle stems and branches. Trees often die within one-to-three years following the initial attacks.

Emerald ash borer is native to Asia including China, Japan, Russia, and Korea. The pest was probably introduced on pallets or wood that was used to stabilize heavy cargo. The insect affects all ash species native to the Midwest and is known to infest certain elms and walnuts within its native range in Asia. 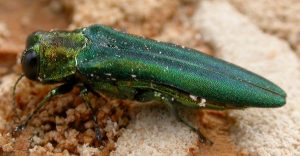 Identification: Emerald ash borer has a similar appearance and life cycle to native Agrilus borers such as the bronze birch borer and the two-lined chestnut borer that infests oak and beech. Adult beetles are emerald green and approximately ½ inch long. Larvae are segmented flatworms that can reach 1 inch in length.

Biology: Adults emerge from infested wood in June and early July and feed on leaves of ash where they create notches in the margins. 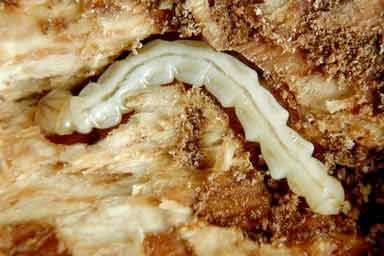 Adults mate and females lay up to 90 eggs in the bark crevices in stems and branches. Eggs hatch within 10 days and first instar larvae bores through the bark into the sapwood.

The entrance holes are inconspicuous but there is often woodpecker activity in the vicinity of new infestations. Larvae create “S” shaped feeding galleries that wind through the cambial area of the branches and stems. The galleries are packed with sawdust-like frass. Larvae complete development in the fall and overwinter as pre-pupae in chambers in the sapwood. Pupation occurs in early spring and adults emerge in late spring through early summer. Adults leave “D” shaped emergence holes that are visible in the bark of infested stems and branches. One generation occurs each year. 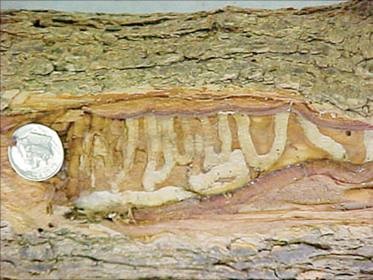 Adults are capable of flying at least a half-mile from the point of emergence. In Ohio, infestations are expanding at approximately ¼ mile per year. Long-distance movement of Emerald ash borer has been attributed to transport of infested firewood and nursery stock.

Monitor ashes and other trees for symptoms of borer attacks and tree decline. Emerald ash borer treatments are most effective when applied on a preventative basis before a tree has been damaged. The most effective treatment for trees smaller than 20” DBH is a soil-applied systemic insecticide containing the active ingredient Imidacloprid. This treatment is injected into the root zone of the tree where it is absorbed and translocated to the stem and branches. Larvae that bore into the xylem are controlled by the systemic insecticide. Late summer and fall treatments are effective, although soil applications are effective whenever soil conditions are favorable for root uptake.

Treatments are less effective on trees that are already infested with borers. Larval galleries often interfere with translocation and distribution of the systemic insecticide. Although preventative treatments are generally recommended, research has indicated that soil-applied Imidacloprid can save ashes after they have been attacked. The condition of each tree should be evaluated by a Certified Arborist prior to treatment.

Proving to be the most effective treatment for trees larger than 20” DBH is Emamectin injected directly into the exposed root flare of ash trees to prevent colonization and control larvae already in stems and branches. Root collar injections provide residual activity better than soil treatments provide, and distribution of the chemical in the crown may not be as thorough.

Heavily infested ash trees should be removed and destroyed by chipping, burial, or burning. Wood should not be stored as firewood through the winter months and firewood should not be transported from areas known to be infested by emerald ash borer.

Maintain the health of ash trees with good cultural practices including pruning, fertilization, proper mulching, and irrigation during dry periods. This will reduce stress and improve the tolerance of trees to borer attacks.

Thank you to Donald C. Booth, Ph.D. for this contribution.