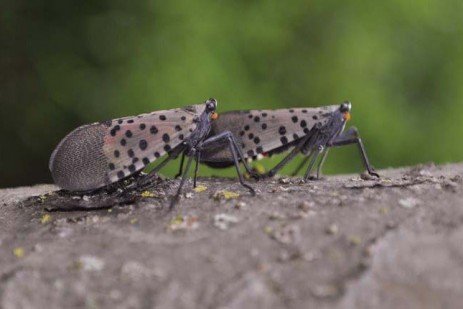 Spotted lanternfly (SLF), Lycorma delicatula, is an invasive planthopper, native to Asia, that was first detected in southeastern Pennsylvania in 2014. It feeds on many plants, including economically important crops like grapevines and ornamentals.

There is one generation of SLF per year. The eggs are laid in the fall and hatch in the spring. Egg masses are laid on hard surfaces (trees, decks, houses, outdoor equipment, rocks, etc.) and protected with a mud-like covering. Each egg mass contains 30–50 eggs. After hatching and before reaching adulthood, SLF goes through four nymphal stages. Nymphs are small (⅛ to ½ inch) and can be hard to find. The first three stages (instars) are all black with white spots, and the last instar is red with white dots and black stripes SLF adults emerge in July and are active until winter. 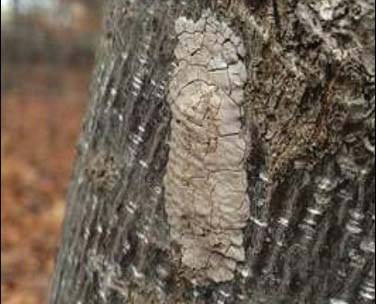 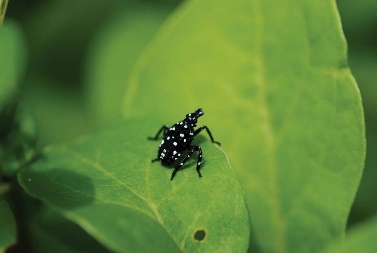 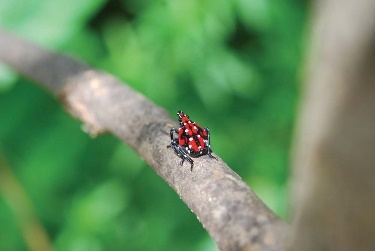 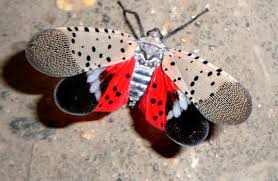 This is the most obvious and easily detectable stage because they are large (~1 inch) and highly mobile. Adults have black bodies with brightly colored wings. Only the adults can fly. SLF wings remain closed while they are feeding and walking. SLF wings are gray with black spots, and the tips of the wings are black with gray veins.

SLF is capable of causing serious damage to host plants, including oozing sap from the trees, wilting, leaf curling, and tree dieback. SLF feeds using a piercing-sucking mouthpart tapped into the plant like a straw. When SLF feeds, it excretes honeydew, a sugar-rich liquid waste product. Honeydew serves as a substrate for sooty mold, fungi that thrive in sugary environments.

SLF expels significant amounts of honeydew, and often the plant surface and the area around infested plants become coated with honeydew and sooty mold (black charred appearance). This mold is generally harmless to people but can damage the plant.

There is no way to prevent SLF from moving onto your property. Be aware that SLF is very mobile and management actions must be continuous to keep them controlled.

Consequences of direct feeding damage to the host trees have not been quantified. SLF does not kill every tree on which it feeds. Some plants are at more risk than others.  SLF is a plant stressor that, in combination with other stressors (e.g., diseases, weather), can cause significant damage to host plants. Following high infestation levels, flagging and canopy dieback have been reported. It is possible that after heavy feeding, multiple years of sustained damage, or particularly dry years, SLF may cause significant damage to ornamental and shade trees. However, currently, SLF is predominantly considered a nuisance pest for homeowners, and death has not been reported in any ornamental tree.

SLF has a broad host range and has been recorded feeding on over 65 different plant species. Despite this broad host range, some plants appear to be more favorable to SLF than others. Numerous variables appear to determine the attractiveness of a particular plant, including what other plants species are available in the nearby landscape, the health of the plant, the time of year, the SLF population size, and how long SLF has been present in the area. We emphasize that not every tree needs to be treated.

Scout the area first, and then consider treating if high populations are found. Nymphs, in particular, seem to have an especially large host range, whereas adults seem to depend more on certain hosts. Table above lists the key plant hosts of SLF and the time at which SLF are most likely to be found on these hosts (This table does not represent a comprehensive list of the plants on which SLF feeds); rather, it shows the patterns of SLF feeding that have been observed through the season. The patterns in host use may change with varying weather conditions, region, and other undetermined factors.

When you travel check your car and any outdoor items you are moving (grills, outdoor furniture, landscaping supplies, mowers, etc.). Check for SLF egg masses from September through June. Remember that egg masses may be underneath your car or in your wheel wells. During all other times of the year, check for nymphs and adults, and keep your windows rolled up when you park. Don’t store things or park under infested trees, and don’t move firewood.

Tree-of-heaven (Ailanthus altissima) is an invasive plant that is common in landscapes and disturbed areas, such as along the sides of roads. This is a preferred host tree for SLF, and current management efforts are focused on removing it. Tree-of-heaven grows rapidly; it can reach up to 100 feet tall and 6 feet in diameter. They spread by seed and will also produce “clones” by their roots.  One additional concern with this invasive species tree is that they grow 15 times faster than surrounding shade trees and quickly over-shade them causing decline and death.

Only use insecticides that are registered by the Environmental Protection Agency (EPA) to treat any insect on your property. All EPA-registered insecticides have an EPA registration number and a label for safe, appropriate, and legal use.  There are four main methods to apply insecticides: tree injection, bark sprays, soil drenches, and direct sprays (can be applied by homeowners). Systemic insecticides can work well and have residual activity that lasts from several weeks to several months.

Information for above is taken from research completed by Penn State University.  For additional information visit  https://extension.psu.edu/spotted-lanternfly-management-for-residents